You’d be hard pressed to find a Chinese restaurant in Western Canada that did not feature ginger beef on its menu. This sticky, sweet and spicy dish is a favourite of many (myself included). However, you would have a very hard time finding it on a menu in China. That’s because the story of ginger beef, like many other popular offerings on Chinese-Canadian menus, is actually a reflection of the history of Chinese-Canadian immigration and settlement.

In a CBC interview about her book Chop Suey Nation: The Surprising History and Vibrant Present of Small-Town Chinese Restaurants from 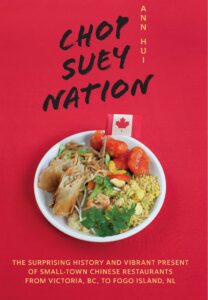 Victoria, BC, to Fogo Island NL, journalist and author Ann Hui described what she calls “chop suey cuisine” as “…a cuisine that was born out of nothing and tells a story of struggle, of perseverance, of entrepreneurial-ism. This is food that was developed by early Chinese immigrants and settlers here in North America who faced a long list of barriers including economic discrimination and systemic racism.” Listen to the interview here.

Chinese immigrants first began coming to Canada in large numbers in the 19th century. They were mostly Cantonese speaking people who came to Canada from four districts in the Pearl River Delta of Guangdong province in Southern China. They were often brought here by economic prospects like the Fraser Valley Gold Rush of 1858 and the building of the Canadian Pacific Railway. While there was money to be made in Canada, the conditions were often quite poor. Employers saw Chinese immigrants as an easily exploitable source of cheap labour so they weren’t paid as much as their white counterparts for the same work and often were given the most dangerous or least desirable jobs.

Due to the prejudices held by many white Canadians, after the railroad was completed the Canadian government set up a head tax to make it harder for Chinese immigrants to come to Canada. Chinese people were the only ethnic group that had to pay this fee. At first, Chinese people were required to pay $50 a person to immigrate. This price grew until 1903 when it reached its peak of $500 a person. Then in 1923 the government effectively banned Chinese immigration with a policy that would remain in place until 1947.

The Chinese-Canadians that were here faced even more restrictions. In British Columbia, as with much of the rest of Canada, the government didn’t allow Chinese immigrants and Chinese-Canadians to become citizens which barred them from working in many professions. Operating a restaurant was one of the best professions that remained open. So, it was often out of necessity that many Chinese immigrants ended up running restaurants across Canada.

Many of these restaurants served a combination of western food and chop suey. Loosely translated, “chop suey” means “assorted mix” in Cantonese. These dishes weren’t traditional Chinese food. They were created by these new restaurateurs, many of whom had no professional cooking experience. They also had difficulty accessing the kind of ingredients required to make authentic Chinese dishes and on top of that had to cater to western audiences. So they made do and often made it up, trying things until they worked. This is how a number of Chinese-Canadian dishes were created, out of the creativity and ingenuity of these restaurateurs. They would be inspired by Chinese techniques and flavours and then they would use what ingredients they could get their hands on, and create their own dishes.

A perfect example of this is ginger beef. Today ginger beef is a staple on Chinese restaurant menus in the prairies and Western Canada, but it got its start in a restaurant in Calgary, Alberta called the Silver Inn. In 1975, sisters Louise Tsang and Lily Wong, newly arrived in Canada from Hong Kong, opened the Silver Inn with Lily’s husband George Wong serving as the restaurant’s head chef.

At first they served western fare. They offered Peking style dishes as well but these weren’t nearly as popular to Calgarians at the time. It was then that George Wong had the idea to change up a recipe he had previously used when he was working in the UK. Basing his idea on a beef dish that was sweet, chewy and went great with beer, George Wong made a few alterations to cater to his Canadian customers. He toned down the spices, making a sweet chili-garlic-ginger sauce, and he tried battering and deep frying the beef. This last step was key because Calgarians were used to fresh, local beef, so this method still achieved something similar to the chewy texture of the original dish, while keeping the beef itself nice and tender. The dish took off and became the chop suey staple we see today.

Be sure to share on social media whatever you create and tag the Sidney Museum.